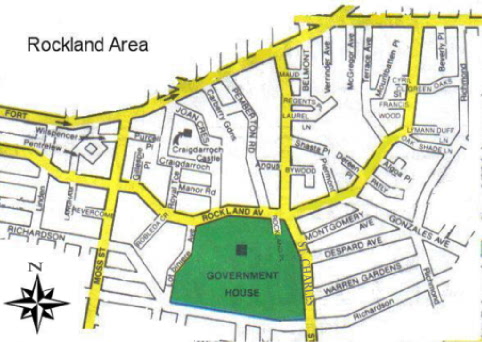 The walk takes you through an area with stately mansions located in a unique Garry oak parkland. It includes the three Rockland landmarks – Government House, Craigdarroch Castle, and the Art Gallery of Greater Victoria. This self-guided walk features several homes of interest designed by leading architects and builders of the last two centuries. It also includes more modest structures, the dwellings of the middle class. The tour starts on Linden Avenue, at the western border of the Rockland neighbourhood, continues east along Rockland Avenue, down a few side streets, north on Pemberton Road, along Fort Street, south on St. Charles Street, along Rockland Avenue, left on Terrace Avenue, a short walk to McGregor Avenue, and finally along Oak Bay Avenue to Rockland. The final tour is of the area surrounding Craigdarroch Castle. The entire walk may take a few hours or can be completed in shorter walks.

The walk has been divided into 4 sections. With the first 3 tours, each succeeding tour starts where the previous one leaves off. The fourth tour can be reached by a short 10-minute walk from the end of tour 3.